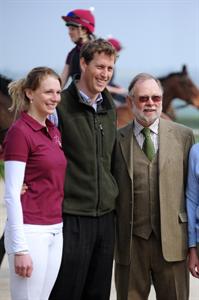 Charlie Longsdon comments "What a fantastic season it has been. With no runners today on the final day of the season, we have ended the season with 69 National Hunt winners (from 44 last season) and 2 flat winners. In my mind that is definitely 71 for the season!!! All this from just 349 runners (233 in 2010/11) at a winning percentage of 20% (50% of all runners have either won or been placed). We have won just over £380,000 in prize money, up by over £100k from last season. To the £1 stake you would have made a profit of over £56 if you had backed all our horses - there is only one other trainer in the top 90 who has a better profit than us!!. These are stats that I have to be hugely proud of as if you look up the list only the top three trainers have a bettered them - Henderson, Nicholls and McCain. I know there is still today to go, but in all probability we will end up in 13th place in the trainers championship (we were 23rd last year) and in terms of numerical winners we will be the 11th winning most trainer of the season (from 14th last season). BRING ON 2011/12!! How are we going to better this season. My initial target will be to try and break the £500,000 barrier in prize money. In terms of winners we need to better 70, but by how much I have not yet thought...........

However there is no rest for the wicked and the new season kicks off again tomorrow. We aim to have two on the first day. Newton Tonic goes to Wetherby (if it is on) and Tatispout tries 2m4f for the first time at Ludlow. Tomorrow night we want to be top of the trainers championship!!"

Picture: Charlie Longsdon with his wife Sophie and James Hayman-Joyce