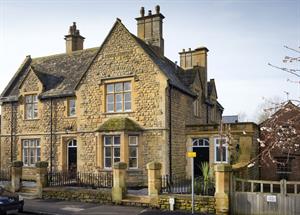 The Old Police Station is believed to date from 1897. It’s an attractive two storey building of traditional Cotswold stone and slate construction. The Gloucestershire Constabulary sold the property to the current owners who have sympathetically restored and extended the building to form two semi-detached houses.
Now named numbers 1 and 2 Peelers Court, after Sir Robert Peel who was the Prime Minister of the United Kingdom in the mid 1800’s. He helped form the modern day police force with police officers known as ‘bobbies’ in England and ‘peelers’ in Ireland, his personal namesakes.

More recently, The Police Station was used by the BBC to film Father Brown staring British actor Mark Williams as the eponymous crime solving Roman Catholic priest. Filmed in the Cotswolds and set in the 1950’s using adaptations and original stories written by English novelist G K Chesterton. Two series have already been produced and aired on the BBC with a third currently being filmed here in the Cotswolds.
1 Peelers Court comprises the original front door, tiled entrance hall and stairs of the Police Station with a large west window at the top of the stairs. The parquet floored living room to the front of the building features a stone fireplace and large stone mullion windows. The kitchen/dining room has been extended to create modern light living with direct access to the private courtyard. A practical utility and cloakroom finishes off the accommodation on the ground floor. Upstairs there is a master bedroom with an en-suite bathroom, a second bedroom, a second bathroom and a useful study/dressing room off a light and spacious landing. Outside there is a covered garden area which could be adapted for extra accommodation or storage and two parking spaces.
2 Peelers Court features a generous entrance hall with built-in storage, sitting room with bay window and fire place, kitchen/breakfast room with useful utility cupboard, a dining room or potential third bedroom and a wet room on the ground floor. There are two bedrooms one with an en-suite shower room and the other with an en-suite bathroom on the first floor. Features include original parquet flooring in one bedroom, stone mullion windows, original doors, original fireplaces and even one of the cell doors from the Police Station with the peephole still intact. Outside there is a private courtyard garden and off street parking for numerous cars in the secure electric gated communal courtyard.
Tom Hayman-Joyce comments “These are two fabulous properties located right in the heart of Moreton-in-Marsh within easy, level, walking distance of all the facilities Moreton-in-Marsh offers, including the mainline railway station to London Paddington. The builder’s attention to detail is so refreshing, they have kept the character and feel of the original building and adapted it to suit the modern living style. We have successfully sold and agreed sales, at the full guide prices, for the terrace of two and three bedroom houses which sit in the courtyard behind the Police Station and we are now looking forward to selling 1 and 2 Peelers Court.”
Hayman-Joyce is marketing 1 Peelers Court at a guide price of £475,000 and 2 Peelers Court at a guide price of £485,000. For more information please contact their Moreton-in-Marsh office on 01608 651188 or moreton@haymanjoyce.co.uk