The Hayman-Joyce Team Relay at the Moreton-in-Marsh Show 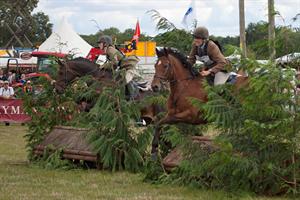 We are very proud to sponsor the Hayman-Joyce team relay at this years Moreton-in-Marsh Agricultural show.

The course was skilfully designed by Jon Trice-Rolph, who successfully incorporated enough technical elements into the course to challenge both horse and rider. The event is a straight forward knock out competition with two horses competing per team. Thirteen teams competed on the day for the Hayman-Joyce Challenge Cup and the competition was fast and furious. The crowd really got behind the competitors and roared as they crossed the line.

The event was run by Tom Hayman-Joyce himself, chief steward of the Grand Arena. Tom comments "the races were fabulous some decided by as little as a neck at the finish, the competition was fierce and the crowds really got behind the competitors and joined in the fun"

Fernies Fiasco won the event in a thrilling final by a couple of lengths over New Forest Fillies and All The Gear No Idea won the third place shoot out. The trophy was presented by Mr and Mrs Tom Hayman-Joyce.