The Cotswold Challenge has been completed 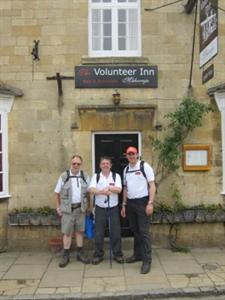 We are delighted to report that James, John and Tom safely arrived in Chipping Campden on Sunday afternoon.

John and Tom were a little sore, having walked the 102 miles in four days. James had started the previous Saturday and had a day off in the middle so he was in better shape.

For the many of you who have already sponsored us, please accept our, and our chosen Charities, grateful thanks.

For those of you who are waiting to see if we actually completed the course NOW IS THE TIME TO SPONSOR US!
To sponsor the Partners please go to www.justgiving.com/teams/haymanjoyce

See below for extracts from a letter from Robert Barnett, a Kate’s Home Nursing Trustee.

Extracts from letter from Robert Barnett:

“What a fantastic success! You each did so well to hit the demanding schedules you had set and we cannot thank you enough for all that you have done to raise such a wonderful amount of money. Everything up to and including a flypast sets a new benchmark for us.

It was a real pleasure for Anna, Chris and me to be able to be involved in a small way at the end of your far longer trek. The group which gathered at Broadway was a very happy one, which says a lot about the atmosphere in your offices. It was lovely to see the younger people walking so uncomplainingly with the rest of the party and I hope that John’s children will be pleased with the photograph which shows them with the three of you on the home straight”.

The flypast was courtesy of Peter Taylor of Moreton-in-Marsh, who flew over Broadway Tower in a light aircraft with a colleague who took photographs of us standing around the Tower – see our Facebook page for some of these and other photos.