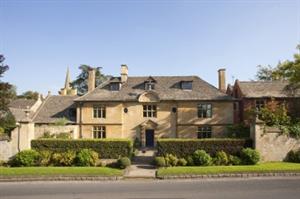 Nick Churton of Mayfair International Realty considers the lovely Medford House in the English Cotswolds – now on the market with MIR affiliate, Hayman-Joyce.

What Tuscany is to Italy and Provence is to France, the area of uplands called the Cotswolds is to England. The Cotswolds is, in fact, a range of hills. But the area has come to represent so much more than that.

Thanks to its geology the Cotswolds has come to epitomise the English countryside at its best, and has won admirers from all over the globe. But it is not just the beautiful natural environment that pleases so much. There is another important ingredient that delights – the architecture. Few rural areas – anywhere – are defined quite so much by their vernacular style as the Cotswolds. Built from the glorious local sandstone that gives the buildings their unique golden honey colour this alone is enough to draw admiration. But the crowning glory is the mix of rustic artisans’ cottages, village houses, and refined manors and mansions that sit together in perfect arcadian harmony.

How better to illustrate this than with Medford House near Chipping Campden, Gloucestershire? With Shakespeare’s Stratford-upon-Avon less than nine miles away this house is in the heart of England. The Cotswolds is full of gorgeous houses, yet Medford House seems to encapsulate all that is so wonderful and popular about the area.

Nikolaus Pevsner, who wrote and edited the definitive series of books on the buildings of England, described the house as, “The textbook example of the slow transition from the vernacular Tudor Cotswold style to Queen Anne Classical’. This comment reflects the age. The Glorious Revolution of 1688 ousted the Catholic James II, who was replaced by the Protestant Dutch-born William of Orange and his bride, Mary, who ruled as joint monarchs until Queen Anne ascended the throne in 1702.

Medford House was built in 1694, the same year that the Bank of England was established. At the same time the craze for coffee houses was sweeping London, and England was heavily in debt through paying a high price for war overseas – nothing new to the nation, then, or now.

But in the little Cotswolds village of Mickleton all this must have seemed a world away. Samuel Medford was building a house that would carry his name for over three hundred years and come to be ever more admired as each year passed.

This is architecture that has been copied ever since. Yet here is the real thing. It has Grade I Listed status – the top level of protected buildings in the UK. It is as good an example of Cotswold style, as one will ever find – real in its layout, in its stone, its timber, its workmanship: real from the top of the chimneys to the bottom of the foundations – such as they may be. Of course it is not so draughty now as it would have be back then, and the fittings are rather more sophisticated. The beautiful garden, too, may reflect another fashion but it is hard to see from the front how old Mr Medford would have noticed much difference. What he would notice is the change in his fortune. The asking price today is £2.4 million ($3.83 million). In 1694 this would have been worth about £187 million ($298 million) – more than enough back then to pay for a war or two.